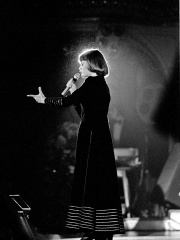 On 21 November 1965, in the legendary Olympia Theatre in Paris it was time: with ‘Mon credo’ her career was founded. Stark still would say that Mireille’s extraordinary success, and the incredible speed at which she would become so famous so quickly was hardly miraculous. She likes work for work’s sake.

At the peak of a heavy schedule, intensive and numerous recordings, such as when she began doing promotions in the United States, Mireille only slept four hours a night, and would make up for it later. Her motto, the religious person that she is, became: “My God and My work”. Finally, on Saturday the 15th of March, she taped the Ed Sullivan Show, the most popular television program in the United States, with an audience of 50 million. It would be the start of her break through in the United States. Then it’s Las Vegas, Hollywood, tons of interviews, phone calls, invitations… In New York, where she is the guest star of the Merv Griffin Show, Mireille is a big hit. She always sings about love. “Music is the best way for me to say I love you”, she admits.