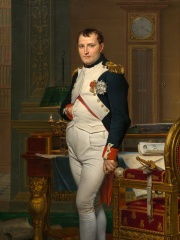 Napoleon’s daily routine was perforce limited. Marchand awakened him early and served coffee in bed. One or more of the valets washed him and helped him shave, then rubbed him down with a coarse brush and doused him with eau de cologne (which soon ran out and was replaced with homemade lavender water) and finally helped him dress, an elaborate process that required one or two hours.

Weather permitting, he and Las Cases usually went for a long walk or horseback ride before breakfast. The emperor breakfasted late either in his room or, in fair weather, in the small garden. When in the mood he followed this with dictation to Las Cases, Gourgaud or Bertrand. On occasion he received guests, usually lunched alone in his room, conversed in Italian with O’Meara and toward evening walked or rode with the ladies in a small open carriage in good weather but otherwise stayed by the fireplace reading. He often interrupted this routine with steaming baths that sometimes lasted for three or four hours.

Dinners were formal. The carefully coiffured and gowned ladies and uniformed generals gathered in the drawing room, everyone standing to await the emperor’s arrival after which the ladies only were permitted to sit until dinner was served. Although the food was poor it was eaten off precious china while equally inferior wine was drunk from exquisite crystal goblets. Table talk was restrained. If the emperor did not speak no one else spoke. Dinner normally lasted for forty minutes before the company returned to the drawing room. Pleasantries there consisted of Madame Montholon warbling a few French ballads followed by someone, often Napoleon, reading a play, usually one of Racine, Molière or Voltaire’s tragic dramas. Conversation was normally light, the emperor twitting the ladies, sometimes rudely, but on occasion reminiscing, often to the company’s delight. Cards or chess also whiled away the hours until the emperor retired, usually around eleven.

A wash and brush-up

Each morning, Napoleon would get up at around 7am. As soon as he was up, he would have a cup of tea or an orange blossom infusion and read the day’s post with his secretary. He was very sensitive to the cold and so would always sit next to the fireplace, with a roaring fire already lit. After his tea and post, he would summon his servants to take his bath and get dressed. This would take nearly two hours as, unlike many of his contemporaries, Napoleon took his personal hygiene very seriously. With his personal valet, Constant, holding the mirror, Napoleon would then have a shave, doing it himself. When on a military campaign, he made sure that he always had with him his little box containing all the necessary hygiene items, including a comb, razors, nail scissors and files, toothbrushes and bottles of eau de cologne.

Napoleon loved taking baths, which always had to be very hot. As Napoleon read the newspapers and took his hour-long baths, his servants would bustle around him, continually adding hot water to keep the bath at the right temperature. After his bath and shave, Napoleon would be rubbed down in eau de cologne and then his valet would dress him. He would wear a shirt, a waistcoat, tight-fitting trousers and stockings. He would then put on his colonel de grenadier uniform (which was blue) or his chasseur de la Garde uniform (which was green). He would finish it all off with his famous black, two-horned hat; he would have a new one bought for him each month. During the winter campaigns, he would also wear a large grey coat to keep himself warm from the cold and the rain.

The morning: visitors and lunch

In the morning, Napoleon would receive his brothers and his aides de camp who transmitted his orders as well as ambassadors and foreign representatives. Between 11am and noon, he would take lunch, sat at a small table in the company of his secretary and one or two others. Sometimes he would lunch with his wife. Lunch was always quick, sometimes barely lasting fifteen minutes! Napoleon preferred simple food, such as roast chicken, pasta (which he discovered during the Première Campagne d’Italie) and wine mixed with water. Afterwards, he would have a cup of coffee.