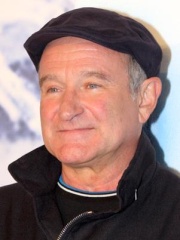 Robin McLaurin Williams (July 21, 1951 – August 11, 2014) was an American actor and comedian. Known for his improvisational skills and a wide variety of voices, he is often regarded as one of the best comedians of all time.

During his lifetime, Williams was interviewed countless times by leading publications, sharing his smart, witty wisdom. Here, a few notable habits he lived his 63 years of life practicing, from positive thinking to putting others first.

As anyone with a best friend knows—no one can make you laugh harder or get you out of your deepest, darkest funk better than your pal. They know how to tickle your funny bone (and yep, get on your nerves, too). When talking about his long friendship with Williams, Steven Spielberg explained how much Williams valued loyalty and connection. In fact, an interview in Vanity Fair, Spielberg said Williams would call him once a week at the same time and come prepared. “He would do 15 minutes of stand-up on the phone. I would laugh hysterically . . . he’d always hang up on you on the loudest, best laugh you’d give him. Drops the mic, that’s it.”

Those who invest in their friendships have been found to lead richer and more authentic lives, where they feel fulfilled and empowered to be their best selves. Whether your friends are close in distance, or near to heart, reminding them how much you care not only serves them, but you. It can even be a nudge. As Billy Crystal shared with People about Williams, it can go a long way. “On occasion, he’d just reach out and hold my shoulder and look at me like he wanted to say something. He hugged me goodbye, and Janice, and he started crying,” Crystal said. “I said, ‘What’s the matter?’ He said, ‘Oh, I’m just so happy to see you. It’s been too long. You know I love you.’ ”

He was addicted to making people laugh.

Throughout his career, Williams was vocal about his struggles with addiction to not only alcohol but cocaine. He isn’t alone, considering many creative professionals turn to substances to improve their energy and allow them to work endlessly on their craft, all while hiding insecurities and often times, depression. What he was most dependent on was a double-edged sword: laughter. As Crystal explained it to Rolling Stone, “That acceptance, that thrill, is really hard to replace with anything else.”

Also when talking to the Rolling Stones, Williams credits his desire to become a comedian to the challenge of getting his sweet, yet stoic dad to let one rip. “I saw my father watching The Tonight Show with Jonathan Winters. My dad was a sweet man but not an easy laugh. My dad lost it, and I went, ‘Who is this guy who made the great white father laugh?’”

This love of laughter was partly what kept Williams tormented, yes, but also happy. It’s been found that making others smile keeps you positive, too, making a case for attempting to brighten your friends, family or even a stranger’s day.

He wasn’t afraid to be different.

David Letterman shared when he first saw Williams on stage, he was a bit skeptical. Even so, he made a note to keep an eye on him. How come? He was thoroughly, truly, unapologetically himself—in all of the chaos and crazy that came with him. “Because of his energy, it was like observing an experiment. All I could really do was hang on the microphone for dear life. Here was a guy who could levitate,” Letterman shared with Rolling Stone. “We knew that whatever it was Robin was doing, we weren’t gonna get close to that, and we were frightened that, ‘Oh my, maybe we’ve come out here at exactly the wrong time, when everything was changing, and all we had was our stupid little jokes.’”

You’re only given a little spark of madness, and if you lose that, you’re nothing.

Most people struggle with the permission to the wild being they are their entire lives—but when they let their flag fly? Magic usually happens. Or as Williams put it, “You’re only given a little spark of madness, and if you lose that, you’re nothing.”

He pursued the moment.

And he never settled for less than best. Creating a dynamic career means always shooting for something more, and not allowing the downfalls cloud the progression you’re making. Part of the reason so many were dumbfounded by his suicide was his approach to life, encouraging others to never give up themselves. As he told BAFTA, “Keep going. Find the thing you love. It’s tough work. Find the thing that really brings you joy. For me, it’s always been comedy and stand-up and acting too because it’s about exploring behavior.”

Though ultimately, Williams didn’t end up following his own advice, the pursuit of growth is a healthy one.