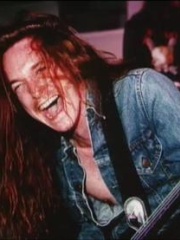 Practicing from 4 to 6 hours every day

Cliff took bass and played at any suitable time: just woke up, before or instead of sleep, rehearsals and gigs, of course. Just imaging: at the moment of joining Metallica in 1983, Cliff already had more than 12000 total hours of practice (there’s a 10000-hours theory about becoming a master in a field). That’s how Burton’s feeling of bass reached almost physical level – he spent too much time with the 4-string mothef*cker. And that routine continued up to the September night in 1986.

‘He really did sit down and study and play Bach. He loved Bach’ – Cliff’s mother

Cliff adored classical composers. What he got from classical music is deep awareness of classical composition, harmonies, notation. Plus good strength and stretch for hands: all the passages and arpeggios were initially a keyboard thing, and on bass they looked pretty unusual and complicated. And that had reflected on Burton’s art, in Anesthesia and Orion particularly.

‘I would be sitting playing my guitar and he’d pick up his bass and immediately start playing a harmony part.’ – Kirk Hammett

One of the strongest sides of Cliff Burton’s musicality – he practically saw the harmonies, and could reproduce any of them whether playing on instrument or singing. For example, when he heard a favorite song with such theme on radio, he always sang a harmony, separating it from the main, root part.

Besides bass, Cliff also played piano (took lessons in childhood) and guitar (thing that naturally comes out being in rock bands). Accordingly to Kirk Hammett, Cliff always carried around a little acoustic guitar down-tuned to C to write harmonies.

And exactly Burton brought the knowledge of harmonies into Metallica.

He was spurred by tragic circumstances

Cliff Burton’s elder brother, Scott, died of a cerebral aneurism at age 16. Following this personal tragedy, the 13-year-old began practicing the bass for up to six hours a day. ​“He said to a couple of people, ​‘I’m going to be the best bassist [I can be] for my brother,’” recalled Jan Burton.