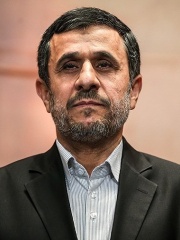 After a 5 am prayer, Ahmadinejad goes out to jog with his security team, Curry reports, while waving his hands in “rocky style”.

He then goes to the gym where he trains for 30 minutes, lifting weights or cycling. The Iranian leader reaches his “spacious but simple” office before 7 am, removes his shoes and scans the daily newspapers and western media outlets.

After an hour in his office, he meets Shiite leaders and addresses a conference in Tehran. By 9:40 am he boards the presidential jet, “a 50-year-old airplane, likely a result of Western sanctions” and flies to an eastern province.

According to his aids, Ahmadinejad often sleeps three hours a night, ending his work days at 2 a.m. They claim that even Supreme leader Ayatollah Ali Khamenei has advised him to get more sleep.

After meetings and tours near the border with Turkmenistan, he lands back in Tehran at 6:35 pm as Curry asks him what he wishes for Iran. Ahmadinejad replies, “I want the same future that I want for every nation: peace, friendship, happiness and unity.”

The Iranian leader then returns to the presidential palace to hold more meetings, stops for prayer, continuing to work until midnight, when he calls it a day.