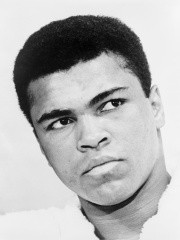 Ali started each morning with prayer and a long outdoor run, or “roadwork” in boxing parlance. Running was a core part of his training – endurance and ability to maintain stamina through 15 rounds was a key advantage for a heavyweight. He used heavy boots to increase the leg workout. Ali enjoyed running and would choose it frequently over public transportation.

Ali worked out six days a week, and would train anywhere between two to fourteen weeks ahead of a fight. “I hated every minute of training but I said, ‘Don’t quit, suffer now and live the rest of your life as a champion.”

Ali spent his early days training at the 5th Street Gym in Miami, Florida. Surprisingly, Ali relied on calisthenic training more than weight lifting. Jumping rope was a staple part of his workout, with around 10-20 dedicated minutes. Many considered him to be one of the best jump ropers in boxing and believed that it aided his quickness in the ring.

Muhammad Ali had a solid appetite and loved hamburgers. He actually opened up a chain of hamburger restaurants called ChampBurger in his former home state of Florida.

Ahead of his time, he ate wholesome and nutritious food always with protein. For him, this could have been chicken, steak, vegetables, fruit, and grains. Muhammad prided himself on never drinking alcohol or smoking cigarettes. After victories, he would celebrate with friends and family over orange juice at home and keep his bedtime.

Ali strived to pray five times a day to abide by his Islamic faith, but typically averaged twice a day – once at dawn and a second time at dusk. In keeping with his religion, he would be sure to shower each time before prayer to make sure he was clean from head to toe. His favorite downtime activity was watching TV. He loved watching his old fights, especially the Thrilla in Manilla and Rumble in the Jungle. Other times he would opt for baseball or basketball games.

Muhammad was not just a fighter in the ring, but outside as well. Standing up for his rights, he refused to participate in what he felt was an unjust Vietnam War. His efforts to stand against the establishment was a big symbolic win for the Civil Rights Movement. He preached for racial unity and spent his retirement working vigorously for multiple charities. Even though he is not with us today, his words and actions continue to inspire many and remind us to keep fighting against injustice even outside the boxing ring.

He never had a set routine and at different parts of his boxing career he had different routines but his routine that he usually did was like the below:

Warm up:
– side to sides
– torso swivels
– jumping around on toes to limber up
(15 minutes in total)